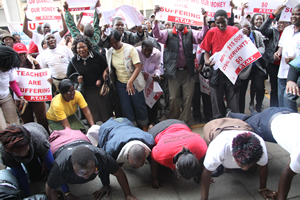 The insensitive and arrogant GNU has declared a total war on the government workers of Zimbabwe simply for being faithful workers. Their running dogs of Capitalism like Coltart, Matibenga, Mudenge and Biti must reform today! A PDL linked wage is our legitimate demand. Aluta continua comrades! Moreover, we are outraged at the closing of evil ranks between public and private business capitalists. We demand the reinstatement of unfairly suspended ZESA workers including their union president Angeline Chitambo who are being victimized for standing up for their fellow workers` rights! United we stand comrades. We salute those workers who continue to fight and resist in fighting for their children to have food and go to school and are standing firm on demanding agreed minimum wage and not capitulating to the half “a loaf is better than nothing” approach by the state and some unions. Comrades the heroic examples set by the workers in the struggles in Tunisia, Egypt and Bahrain are testimony that for the poor and down trodden-emancipation lies in our united effort in  struggle and should strengthen our resolve that action is the way   to go . We urge the uniformed forces to also support the struggle. You are workers too!

The trial of six of our comrades Munyaradzi Gwisai, Antonator Choto, Edison Chakuma, Welcome Zimuto, Hopewell Gumbo and Tatenda Mombeyarara on charges of inciting public violence has now come to a decisive stage.
Tomorrow the 15th of February 2012 we expect a ruling at the Harare Magistrates Court. Magistrate Kudakwashe Jarabini is expected to make a ruling following the close of the state’s case two weeks ago. The defence led by Alec Muchadehama has already filed the closing submissions to prove that there is no prima facie case and the state led by Michael Reza has also submitted its response.
We are mobilizing for the ruling at 1115hrs tomorrow. Hasta la Victoria Siempre-Till Final Victory Always.
Posted by ISO Zimbabwe at 3:24 pm 4 comments:

A massive civil servants strike was called from the 16th of January 2012 by the Apex council, a body uniting public service employees in the country, namely the Progressive Teachers Union of Zimbabwe (PTUZ),Zimbabwe Teachers Association(ZIMTA),College Lectures Association of Zimbabwe(COLAZ),Public Service Association (PSA) and the  Teachers Union of Zimbabwe(TUZ) among others.
The strike was so advanced that at a labour forum organised by the Zimbabwe Congress of Trade Union at Raylton Sports Club in Harare on the 20th of January 2012, workers began to moot the concept of a General Strike and demonstration to be called on the Friday the 26th.Howevere at the beginning of the week, Movement for Democratic Change (MDC) Minister of Public Service, Lucia Matibenga initiated negotiations which she had snubbed the week before. Credit must be given to the public service employees who remained resolute.
The meeting between government and the public service employees came out with a shameful and paltry US$7 insult as top up for civil servants salaries. In shock the workers saw the trade union bureaucrats vacillating and amidst confusion the strike is continuing albeit weak, betrayed and directionless.
In cases like this it becomes paramount for left comrades to encourage the striking workers forward through direct solidarity in marches, leaflets and newsletters and to expose the traitorous trade union bureaucrats in its evil alliance with an uncaring government of questionable legitimacy. Solidarity Forever.
Vladimir Mashayamombe
http://isozim.blogspot.com
Posted by ISO Zimbabwe at 10:54 pm 46 comments:

The cross-examination of key sate witness ,a state informer who claims to be Detective Sergeant Jonathan Shoko commenced today at Rotten Row Court in Harare.Defence Attorney Alec Muchadehama seeks to prove the unrealability of Shoko's evdidencev which was presented last week.The state is heavily depending on iots informer in the trial of our comrades Munyaradzi Gwisai,Tafadzwa Choto,Tatenda Mombeyarara,Hopewell Gumbo and others.Meanwhile the trial has been adjourned to Friday the 04th of November 2011.
Posted by ISO Zimbabwe at 4:20 pm 4 comments:

The trial of International Socialist Organisation General Coordinator Munyaradzi Gwisai, National Librarian Tatenda Mombeyarara, NCC member Tafadzwa Choto and other comrades namely Hopewell Gumbo and Edison Chakuma has kicked off in enerst.However today the matter was postponed to the 20th of September 2011.
The state key witness Rinos Chari turned the state case into a farce yesterday when he complained of police brutality throwing eggs into the bourgeois state enforcement machinery. Hundreds of leftists were out in force at the Harare Magistrates’ Court both today and yesterday. The trial was presided by Regional Magistrate Kudakwashe Jarabini and the state with Edmore Nyazamba.
Defense Attorney Alec Muchadehama of Mbidzo, Muchadehama and Makoni failed to come to court today for reasons beyond his control. What is important is that the trial has begun and the state is now merely giving the last kicks of a dying horse.
The struggles of 2011 carried out by the working classes of Egypt, Tunisia, and the Middle East and all over the world remain our inspiration. In their defence outlines, the six comrades are rightfully arguing that the 19th February meeting where 40 of our comrades were cruelly tortured and detained was meant to discuss lessons from the Egypt and Tunisia revolts as well as to commemorate the death of our late comrade HIV and Aids activist Navigator Mungoni. Hence we maintain that the charges were nonsensical, meaningless, baseless and an attempt by the State to persecute human rights defenders.
Let’s smash capitalism and all the other elements of this dying system though mass mobilization and the fight for socialism from below.
Comradely
Vladimir Mashayamombe (mashayamombe1290@gmail.com)
http:// isozim.blogspot.com
Posted by ISO Zimbabwe at 5:13 pm 2 comments:

Our comrades who were facing trial today have had their trial postponed to the 14th of September 2011 .The future of our comrades Munyaradzi Gwisai, Antonnater Choto, Tatenda Mombeyarara, Hopewell Gumbo, Welcome Zimuto and Edison Chakuma hangs in the balance. Scores of socialists and fellow activists who had come in solidarity waited for nearly two hours for the trial to finally kickoff at the Harare Magistrates Courts however the due process was once again frustrated. Magistrate William Bhila then recused himself and the trial will be presided by Magistrate Esthere Chivasa. Meanwhile defence attorney Alec Muchadehama has made an application for refusal of further remand. Magistrate Bhila is the second magistrate to recuse himself .Indeed the recusal by this second Magistrates to preside this baseless case shows that the state attorneys are clinging onto a case without professionalism or reason. Meanwhile solidarity forever!
Vladimir Mashayamombe
http://isozim.blogspot.com
Posted by ISO Zimbabwe at 2:44 pm 4 comments: 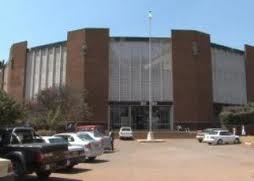 The trial of six International Socialist Organisation (ISO) Zimbabwe comrades, Munyaradzi Gwisai, Antonatter Choto, Tatenda Mombeyarara, Hopewell Gumbo, Edison Chakuma and Welcome Zimuto that should have started today has been postponed to Wednesday 24th August 2011. The state alleges that it has failed to secure a magistrate for the trial. However that is mere nonsense considering that the state had a full month since the 18th of July up to now with which to have found a presiding officer. Meanwhile we still call for solidarity on August 24.
Lenin Ti Chisaira
isozim.blogspot.com