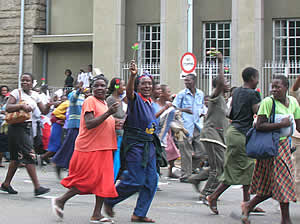 Workers meet on Tuesday 1 May 2007 for Workers Day commemorations in the background of worsening poverty.

The Mugabe regime has used the excuse of sanctions for this and a deteriorating economy. Yet nothing could be further from the truth.

In its 2006 financial year TM Supermarkets provided 75% of the net profit for the entire Meikles Africa group! Food companies, clothing manufacturers and banks are the top valued companies in Zimbabwe. These are the companies that handle important basic needs.

It is exactly these same bosses that refuse to pay import duties in foreign currency.

Enough is Enough! Zvakwana! Sokwanele! May Day must be the time to plan for mass class war on these blood-ducking parasites!
In Harare, the venue is Gwanzura in Highfield. For other venues please contact you local ZCTU offices.
Posted by ISO Zimbabwe at 1:10 pm No comments:

Email ThisBlogThis!Share to TwitterShare to FacebookShare to Pinterest
On Monday Morning 23rd April WOZA`s `Power to the People` campaign spread to Harare when protesters assembled at ZESA offices in Kuwadzana, Warren Park and Zengeza to hold simultaneous 'tough love' protests. Over 470 members from 10 differentareas of Harare took part.

The protests at Warren Park and Zengeza took place without incident and the participants were able to disperse before police arrived but in Kuwadzana eye witnesses reported that the police arrived brandishing guns and 56 members of Women of Zimbabwe Arise (WOZA) - 36 women, 20 men and 10 babies – were arrested.

Lawyers have been denied access and WOZA supporters trying to take in food were only allowed access at 9pm yesterday evening. When they did they noted that many members had blood on their heads and clothing and had clearly been assaulted by police. Threats of beheading were made against those bringing food but no-one who delivered food this morning was harmed.Many thanks to all those who have been phoning in support of WOZA`s Power to the People campaign. Feedback indicates that Luveve and Tshabalala quickly stopped answering calls although some managed to get through on Thursday night; no- one seems to be getting through to Bulawayo Central. 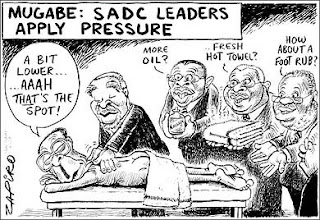 Posted by ISO Zimbabwe at 9:33 am No comments:

Mass Action The Way To Solve The Crisis